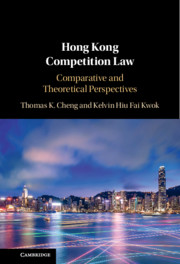 Congratulations to Thomas K. Cheng and Kelvin HF Kwok, Associate Professors in the HKU Faculty of Law, for publishing their monograph, Hong Kong Competition Law: Comparative and Theoretical Perspectives, with Cambridge University Press! Here is the link to the flyer.

This book is the first academic monograph on the new competition law in Hong Kong. It provides an overview of the historical background of the Competition Ordinance, highlighting the debate and the process that led to the adoption of the Ordinance. It offers detailed comparative and theoretical analysis of the key provisions of the Ordinance, focusing on the First Conduct Rule, the Second Conduct Rule, the exclusions and exemptions, and the procedural provisions. It draws on overseas legislation and jurisprudence that inspired the provisions in the Ordinance and incorporates a detailed examination of the latest cases decided by the Competition Tribunal. It engages in relevant academic debates and theoretical analysis of how competition law in Hong Kong should develop in light of its unique economic and political contexts. It concludes by setting forth of a set of recommendations for further reform.

The Honourable Mr. Justice Godfrey Lam JA, who was President of the Hong Kong Competition Tribunal from 2013 to 2021, wrote in the Foreword: ‘To Hong Kong’s competition law which is in its infancy, the publication of an in-depth analysis by two of its foremost academics in the subject is without doubt a most welcome and significant contribution. We are fortunate in that they do not only research and teach competition law, but Thomas Cheng was also a member of the Hong Kong Competition Commission during its first five years of existence, and Kelvin Kwok is also a practising barrister, giving this book the combined benefit of their regulatory and practical insights. The book meticulously narrates the legislative history of the Competition Ordinance, scrutinises its detailed provisions in comparison with overseas models, and subjects the few decisions made thus far by the Court of First Instance and the Competition Tribunal to detailed, stimulating (and, for me, humbling) critique. … I am sure that this work will prove valuable to every student, researcher and practitioner of Hong Kong competition law.’

Further information on the author profiles:

Thomas K. Cheng is an Associate Professor at the University of Hong Kong. His research has appeared in respected US journals including Chicago Journal of International Law, Virginia Law and Business Review, and the University of Pennsylvania Journal of Business Law. He has made critical contributions to the development of competition law in Hong Kong. He advised the government extensively during the drafting of the city’s first competition law. He was a member of the inaugural Competition Commission.

Kelvin HF Kwok is an Associate Professor at the University of Hong Kong. His research has appeared in international peer-review journals including European Law Review, Common Law World Review, Journal of Competition Law & Economics, Journal of Antitrust Enforcement, World Competition, and European Business Organization Law Review. He has been active in knowledge exchange in competition law through his media appearances and serving as a Non-Governmental Advisor to the International Competition Network and as a Co-opted Member of the Consumer Council. He is also a practicing Hong Kong Barrister with considerable experience advising on competition law issues.