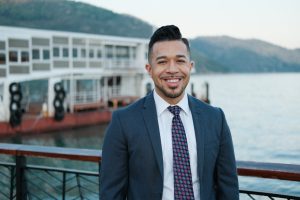 The Faculty congratulates Sean Massa, a graduate of the Master of Laws in Human Rights (LLM in Human Rights) this year, who has been awarded the 2022 Charles B. Rangel International Affairs Fellowship following a highly competitive selection process.

The fellowship, funded by the U.S. Department of State and administered by Howard University, is awarded annually to about 45 accomplished individuals who wish to pursue careers in the Foreign Service. It will support Sean’s participation in the Master in Public Affairs program at the Princeton School of Public and International Affairs, as well as extensive professional development opportunities, including internships, mentoring, and skills training, before becoming a U.S. diplomat in 2024. This summer, he will be working in the office of Senator Dianne Feinstein, a pioneer on women’s rights issues.

Sean is from San Jose, CA and is of Mexican, Japanese, Native Hawaiian, and Apache heritage. He graduated from the University of Pennsylvania and the Yale Divinity School and studied abroad in Vietnam, South Africa, and Brazil. He was a Princeton in Asia fellow and also interned with the United Nations in Indonesia. He moved to Hong Kong in 2018 to take up a Yale-China internship supporting research on HIV and ethnic minority and migrant domestic worker communities conducted by the Red Ribbon Centre, a UNAIDS Collaborating Centre under the Hong Kong SAR Government Department of Health. While in Hong Kong, Sean also did pro-bono work supporting low-income local students pursuing tertiary education opportunities in the United States and created health and wellbeing programming with R.U.N. for Refugees, an NGO that works with vulnerable refugees, especially women.

In 2020, Sean enrolled in the LLM in Human Rights at The University of Hong Kong, where he has gained the knowledge and skillset needed to promote LGBTQ+ rights in the greater Asia region. Despite the challenges of the pandemic and online learning, Sean has greatly valued getting to know a cohort of LLM in Human Rights students from diverse backgrounds. He has enjoyed engaging in meaningful dialogue with classmates from Sri Lanka, Bangladesh, Thailand, Indonesia, and Mainland China, among others. His dissertation focuses on analysing the legacy of the British Penal Code 377 in propagating anti-same-sex legislation across Asian jurisdictions. Beyond the classroom, Sean joined the HKU chapter of the Amnesty International Digital Verification Corps, where he investigated human rights abuses including the use of torture in Bangladesh and Pakistan as well as during the 2021 Myanmar coup. He is grateful for the programme, which has provided him with the toolset and network indispensable for creating meaningful change for years to come as a future diplomat seeking to foster mutual understanding between the United States and Asian nations.